The Early Days of PRSSS: An Interview with Dr. Les Lavkulich

Jeff: First of all, what inspired you to create the society? 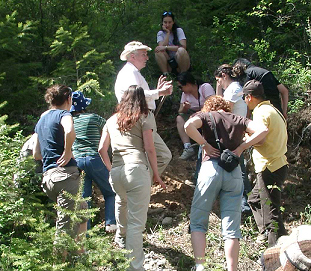 Les: Soil science in British Columbia was different, and still is different than most places in the world. We had a philosophy that soil science was essentially the science of a fundamental environmental resource; it was more than simply agriculture or forestry like it was in many other jurisdictions in North America and Europe.

The idea was that we should have a forum whereby all people interested in soils could get together – I didn’t see that anywhere else.

The other thing was that it’s always been my belief that what we’re doing is always for the future rather than for the past. The emphasis right at the beginning was to make sure that the students were quite central and very important in running the society so that it wasn’t a typical top-down organization where you get a bunch of executive-types to run it, trying to get people involved. This was more of a grassroots movement; it’s the young people who have the ideas and the innovations.

Jeff: In the beginning, what were the main topics of interest at your workshops and meetings?

Les: The first workshop that I organized was “Soils and Land Use Planning.” We were quite concerned about soils being used properly in land use planning. We then held workshops called “Soil Pollution and Degradation in Agriculture,” and “Soil Degradation and Contamination in Forestry.”

Jeff: In what direction do you see the society moving towards in the future?

Les: Fundamentally, the idea was to bring people together to talk about soil and make sure that whatever we talked about regarding soil was credible.

And then the social aspect is very important: to bring together people once or twice a year to meetings, gathering people that you haven’t seen in a long time to share ideas. There is real value in those annual workshops and other meetings. It’s not so much the actual presentations by experts, but it’s the idea of having a social event – lunch together, meeting, having coffee, dinner or something – because that’s really where you make those connections and networks. It’s through talking that you find out that issues that I’m concerned about, someone else in Prince George is concerned about too. That is a big priority to make sure that the communication and opportunities are there. You can’t force it, but you can create opportunities and catalyze it.