2009 Spring Workshop and AGM – Urban Agriculture: Soil and the City 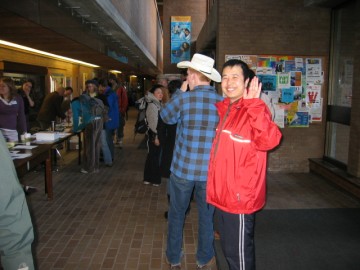 It was an early morning for a Saturday, but the line up was long, stretching and looping in the MacMillan building lobby. There was palpable excitement in the air. People were signing papers, slapping on name tags, and money and paper was changing hands… It was the 31stSociety (PRSSS). After ingesting baked goods and caffeine, soil enthusiasts young and old settled in to the hard wooden chairs of Room 154. Some minutes passed, and then the murmur of voices receded as the first speaker took the podium. Once introduced, Ward Teulon talked about how he uses soil to grow food for his organization, City Farm Boy. He was not a strong proponent for soil testing, instead relying on his senses and accumulated experience to nurture plant growth in urban soils.

Next, Mark Bomford, Farm Coordinator at the UBC Farm, gave an informative and passionate talk about the issues the farm is facing, including the soil issues. The coarse UBC soils are ideal for a teaching farm since water logging is not likely to be a problem during the academic school year, but the farm has difficulty obtaining a local source of nutrients, especially nitrogen. He was followed by Art Bomke, who discussed the materials used for food production in the city. He addressed Ward Teulon’s opinion about soil testing, stating that contrary to Ward’s opinion, testing can give valuable information about a soil such as the C:N ratio, which the senses alone cannot. There was, barely audible, the sound of gears turning as people furrowed their brows and thought about the content of the morning’s lectures. Before the ideas had a chance to settle in, Janine de la Salle was at the podium talking about the interface between urban and rural lands. She had some ideas of how to integrate the two systems, such as building houses beside fingers of agricultural land, but admitted to having a
limited understanding of soils.

After a delicious lunch, participants could choose between two streams; one focused more on the big picture and one directed at local gardeners. Stream B, meant for gardeners, seemed promising. After an introduction and primer by Geoff Hughes-Games, Melissa Iverson gave a captivating lecture about her experience testing soils for urban gardens in Vancouver. She talked about the glacial origin of the dominant soils in Vancouver, Podzols. She also talked about her experience digging holes under various circumstances—in the rain at Broadway and Clarke, and in the downtown eastside. It all came together in her Masters’ project, making a “How To” book for urban soil testing meant for community gardens.It was close to 2:00, and many participants were itching to get outside. Melissa’s lecture now over, the floodgates were released and dozens of people spilled out of MacMillan to participate in a guided tour of soils at UBC. People ogled, smelled and pinched soil, listening to the knowledgeable tour leaders. The rain turned in to hail, but nobody mentioned it or made a move to go back inside.

The last activity of the day involved several wrap-up speeches. At the end of the day people went home with dirt on their hands and soil on their minds.