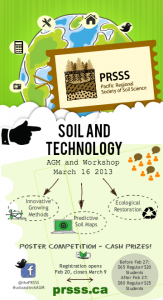 The PRSSS Spring Workshop and Annual General Meeting (AGM) was a great success. The theme was soil and technology with the latter ranging from rain collection buckets to innovative uses of GIS and digital soil mapping. Soil science professionals, students, and enthusiasts gathered bright and early at the University of British Columbia over a delightful spread of refreshments, eagerly awaiting the events of the day.

The keynote speaker, Dr. Sean Smukler kicked off the workshop with a question; can technology save us? He went on to discuss the role of technology in managing soils for ecosystem services, which he defined as supportive, provisional, regulatory and/or cultural services that healthy natural ecosystems provide. Sean went on to pose further questions such as; does technology help us and how? Are there better alternatives? Is it adoptable? And most importantly, is their baggage? Using a colourful presentation Sean talked about new crop production apps, digital soil mapping in Haiti, and handheld devices for data collection. He ended with an open dialogue on other known technologies and he asked which advancements should be prioritized. After the opening presentation it was snack time once again.

The selection of morning speakers consisted of Kent Watson, Lauren Crawford, and Justin Straker. Kent shared his results using GIS to predict the presence of smectite clays in Luvisolic soils. He focused on the issue involved with septic systems in areas containing enough smectite clay to cause significant shrinkage (and swelling!). Lauren gave an informative review of how to get the most out of in situ soil moisture measurements taken by dielectric sensors. Justin guided us through the technical aspects of watershed reconstruction and some interesting approaches to quantifying surface water balances. Everyone had to choose two out of three speakers; what a challenging decision!

Lunchtime was a grand affair with the PRSSS providing an incredible assortment of edibles to replenish the soil fanatics. It was during this time that attention was drawn to the posters entered in this year’s contest and the votes were cast. As lunch drew to an end everyone relocated upstairs for the AGM. The past year’s events were discussed and the 2013 Executive was elected without a hitch. Then it was once again time for the attendees to choose two out of three speakers.

Ted van der Gulik, Dr. Chuck Bulmer, and Dr. Dieter Geesing were the choices for the afternoon. Ted demonstrated an irrigation scheduling calculator, a valuable and practical tool that helps to increase the efficiency of water use and optimize crop yields. Chuck outlined the principles and processes involved in creating digital soil maps and highlighted progress that has been made toward developing improved soil data sets for BC. Dieter’s interests lie in closing Vancouver’s “organic loop” through a large-scale yard and food waste recycling program. He demonstrated that by using state-of-the-art anaerobic digestion technology Metro Vancouver plans to convert all of its recyclable organic waste into a source of power and soil fertility.

Following this, Dr. Paul Sunburn convinced us all of the need for an updated version of “The Soil Landscapes of British Columbia”, an extremely useful but outdated publication, and extended an offer for anyone to join him in doing this. The closing speaker, Sveinn Runolfsson, engaged us in a symposium about soil conservation in Iceland. He showed us the extensive degradation of Iceland’s soils caused by a combination of its inherent properties and mismanagement; then showed us successful ongoing efforts to improve its condition. The presentation was incredibly inspiring.

The workshop ended with many thanks to the speakers and the announcement of the winners of the poster competition. To cap off the day, some of the newly enlightened soil folk went for a beverage at a nearby watering hole for an after party of sorts.

Soil and technology are connected to everything in our day to day lives. Therefore, it is not surprising these two topics were linked for the theme of this workshop and in Sean Smukler’s presentation. Dr. Smukler addressed the crowd at the annual workshop and AGM with a great introduction to its topic convincing everyone of the importance of soil, although the room was already filled with soil lovers. To well understand and appreciate the use of technologies in soil science, he gave the workshop attendants four questions to reflect upon when deciding on using or not a technology. Does this technology help solve the problem? Does it do so better than the alternatives? Is it cost effective? Is it adoptable and by whom? He linked soil to technology by arguing the main influences technology could have on soil science: help to manage ecosystem services, build awareness and capacity, and make money.

First, he addressed the potential for mobile devices and services, and argued the positive impacts of those technologies and applications for on-the-ground practices. Given there is over 6 billion mobile phones in the world, it would be hard (and foolish) to deny the potential of mobile technologies. Then, he presented some important websites and other applications that have been developed and have been proven to help and support soil scientists and other agriculture related professionals. He also touched upon the economic impacts of such technologies. Among the positive repercussions were the potential for connections in isolated areas, the accommodation of banking and trading, as well as the possibility for a better carbon credit system.

Dr. Smukler focused on some specific technology such as the one developed for assessing field scale carbon. This technology is a new cost effective technique for soil analysis using visible-near-infrared reflectance. He also discussed other existing technologies awaiting to be widely used including laser-induced breakdown spectroscopy and the inelastic neutron scattering technique. Despite the great advancement in technology, there is a need and space for development. As argued by Dr. Smukler, the new area of development should be focused on developing spectral libraries, producing more cost effective mobile equipment, and working on regional modeling of soil data. Not to be forgotten, many aerial sensors are going to be launched over the next decade which will advance our capacity to collect and share soil data. Until then, work needs to be done to increase accessibility to data and effectively incorporate new technology into protocols.

Finally, Dr. Smukler left the audience with a simple series of questions to help determine if the technologies we use are worth it: is the technology accurate and easy to use? Does it address the problem? And is it precise, cost effective and desirable? With this in mind, soil scientists can now be more critical when deciding on currently accessible technologies as they wait for new ones to arrive.